Petalumans Power Out at Vineman 70.3

Home/Uncategorized/Petalumans Power Out at Vineman 70.3
Previous Next

Petalumans Power Out at Vineman 70.3

Sunday, July 18th, was the 20th anniversary of the Vineman 70.3 triathlon.  This is a major sports event for Sonoma County and an international star in the triathlon world! Professionals and amateurs come from New Zealand, Australia, Great Britain,  Canada and beyond to race here in beautiful Sonoma County! This is the race that most of us Tri Geeks want to do regardless of where we live.

Of the 2,220 participants in this year’s event the Vineman’s results pages showed that only eight brave souls that listed Petaluma as their home town. 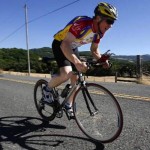 More athletes came from Alaska than Petaluma to race this course!  Petaluman, Ron Svinth, M50-54, is a Vineman junkie, has raced this course for the pasted 20 years.  Even though Ron was injured he still showed up on race morning and put in a great finish, 5:45:53.  I know that he can race much faster but this was about making it 20 Vineman Races in a row! I saw Ron out on the course and he gave me a shout out.  I  was feeling the pain and can’t recall if I was able to say anything back.  I do recall thinking – wow he has done this 20 times!

So here are the results from our home grown vines: 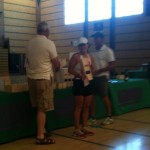 8. Mike Simpson, M60-64.  This was Mike’s first Half Ironman and he trained with this daughter, Kyla, W25-29, who finished her first half in 6:33:21.  Many of you might remember Mike when he was the Principal at Petaluma High School.  He now is at Middle Two Rock School and will be the race director for a 5k Run on October 4th that will benefit his school district and run through the Coast Guard Base (entries available at Athletic Soles).

I wanted to give a shout out to Debbie Decarli, W55-59 from Penngrove who did a 6:37:02.  Also, to our local Banker (Bank of Marin Petaluma) Russ Colombo, who works in Petaluma and sleeps in Marin.  He  did a 6:15, and still kept banking hours!

It might also interest you to know that a visually impaired athlete from Folsom, Ca, Richard Hunter,  also raced the course and finished in a time of 5:10:41.  He was tethered to another swimmer for the swim course, road a tandem and ran with a guide.  Ariel Gilbert, who is also visually impaired, and lives here in Petaluma and has several world medals in rowing.  Last year she did her first triathlon a sprint in Santa Cruz.  Maybe we should get her to try the Vineman!

On July 31, is another Vineman Event.   There is the Full Vineman – 140.6 miles – 2.4 mile swim, 112 mile bike and 26.2 mile run.  If this seems like too much then there is also the relay.  So you and two of your friends can break up the challenge.  The other races on the same day and on the same course include: Barb’s Race – same as the Vineman 70.3 (run course a little different). This one is only for the ladies and many gals from P-town will be racing it for their first time.  There is also a relay event and I will be in it with the Athletic Soles team.   Michelle Hartwell is our swimmer, I will be doing the bike and Mel Belluomini will be our runner.  Looking for a first place finish from our team – so cheer us on!

If running isn’t your thing (can’t imagine that) you can also do the Aqua Bike which is a 2.4 swim and 112 bike or the Aqua Half which is half the distances.

Hope to see you out there cheering.  You might just get inspired.