On Saturday, July 17, Petaluman Chris Wolff woke up at 3:00am and had a quick breakfast, he then jumped on a shuttle to the start of the Tahoe Rim Trail 50 mile run. This race begins at 6am at Spooner Lake (elevation 7000′) on the South/East Shore of Lake Tahoe. The course reaches a high point of 9200′ and runners spend much of their time at or above 8000′. The total elevation gain is just over 12,000′.   This is a serious run!

In addition to the elevation gain, Chris had to prepare for the heat and record setting temperatures that were predicted for the day.  The higher you go the hotter it gets!  To prepare for the weather, Chris did a fair amount of heat training leading up to this event.  He paced a friend for the last 40 miles of the Western States 100 miler, where the temperature topped 98 degrees.  This was in addition to running a total of 110 miles for the week.  Needless to say, Chris felt confident going into this race.

e 15 that takes runners down to 6000′ , into an area that is hot and humid due to a weather inversion.

At 6am Chris “bolted out of the starting line” and began his 50 mile adventure.  He felt good and completed the Red House Loop without any problems.  Hydration and calorie intake is vital in a race like this and Chris was consistent in both and reached mile 30 in “good spirits”.  He then descended 2000′ over 4 miles to the Diamond Peak Ski Resort lodge.  His reward was the cheers and smiles from his beautiful wife, Amy and their children.  Chris said, “That this made him feel great”.  However, after leaving the smiles behind him, he realized that he would now have to run 2 miles with an ascent of over 2000′ back up to the 9200′ snow peak aid 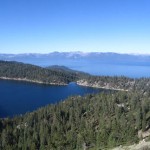 station. For Chris, this turned out to be the real “taste of hell”!  This stretch of the course was completely exposed; hot and registered a 30% grade on his Garmin GPS.

Once at the top, the views, cool breeze and more runnable trails were a welcome treat! Chris continued to run north along the Ridge Trail trying to manage a sour stomach that had developed after the brutal climb out of Diamond Peak. This lasted until the mile 42 aid station. The volunteers there were awesome and helped to cool Chris off with sponges of ice cold water.  He dined on some tasty chicken noodle soup to get more sodium in his body.

After that Chris was able to pick up the pace over the last 8 miles.  He arrived at the finish line at 5:26pm for a total running time of 11 hours 26 minutes, good for a top 25 finish out of 140 runners! Chris said that his biggest thrill was “running the last 50 yard with his three daughters”!

Not all of us can, or even want to run 50 miles, but Chris encourages us all to seek out our own challenges on the trail.  So… if not the Tahoe Rim to Rim, how about a nice hike up to Putnam Park and take in our local views.

Congratulations Chris – you are a stud!

Keep up the Pace Petaluma!