Skunked on a Run!

Home/Uncategorized/Skunked on a Run!
Previous Next

Skunked on a Run!

On Tuesday morning I decided to go out to Shollenberger  Park for a 10 mile run with my girlfriend Carol. It was 6 am when we started out from the parking lot at the Sheraton Hotel.  I had a running light on – you know the kind that makes you look like a miner!  The trail was really dark so we were happy for the light. After crossing the second bridge I saw what looked like a cat running on the trail just 20 feet in front of us.  I commented on the “cat” to Carol who stated emphatically “That’s no cat, that’s a skunk!”

When I got a little closer, it was clear that this was indeed a  skunk.   Skunks tend to be somewhat clumsy runners due to their short, stocky front legs.  This little guy was really comical but he was up front and setting the pace. 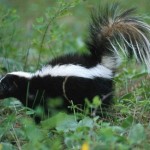 He did not want to get off the path or speed up for us.  I was getting kind of cold and decided to pick up the pace and get a little closer.  He stopped dead in his tracks and shot me a nasty glance that stopped me dead in my tracks causing Carol to bump into me in the dark.  I have encountered runners, who just will not let you pass when you call out “left” and I have always found a way around them – sometimes with a sharp elbow.  But, “Pepe le Pew” was proving to be more of a challenge.  Let’s face it, this little guy was packing an arsenal of foul fuel.  I didn’t want to get within range.

For the next 300 meters we reluctantly let Pepe  set the pace.  Finally, I decided I could no wait forever and pushed the pace.  Pepe stopped, turned around and began charging us with his red demonic eyes blazing!We did what all two legged females of our species we do – we screamed and retreated!  Pepe seemed satisfied with our retreat and continued back on his course at his slow and steady pace.   At that moment, two mountain bikers began approaching from the opposite end of the trail.  Remember, it was pitch dark and all we could see were  their lights.  At  first I thought they might be larger predators!   Pepe must have 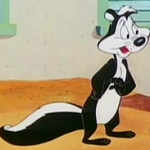 thought so as well and must have felt cornered.  So he decided to charge us instead of going forward.  We screamed again and retreated.   The cyclists stopped and had a good laugh.  “Did you see the skunk chasing us?” I called out.  “Oh yeah” they replied laughing.   “Do you see him?” I asked.  “No” they replied.  “You’re okay, go ahead” one of cyclists called out.  “You guys first” I insisted.  So the cyclists passed us without a problem.  We continued on our run without another sighting of our furry friend, Pepe!

Later that same day, I learned that a friend of mine was running in Marin on his lunch hour  when a squirrel  ran up a pole as he approached and then jumped him!  Seriously, jumped him and left him with a few scratches!  (At least that’s the story he’s telling his wife).   At least it wasn’t a skunk.

So what did I learn from my early morning encounter with the skunk?  Apparently, it is not all that unusual for early morning runners to have encounters with skunks.  Skunks are nocturnal, but may at times be seen in the early morning or late afternoons searching for food.   They are generally shy creatures. They discharge their scent when disturbed, cornered, or harassed. Prior to releasing scent, the skunk often will stomp its forefeet rapidly while lifting its plume over its back. A skunk has the ability to direct the musk to either side, in back of, or in front of its body, by alternating the direction of the protractile glands. The fluid may be expelled a distance of 8 to 15 feet, with a mist going even farther.

I now realize that we were well within range of Pepe and were just lucky to get off  “scent” free! One other runner wasn’t so lucky. She was also on an early morning run when a skunk was startled by a truck and  took it out on her. She experienced a direct hit on her shoes and tights. Her husband wouldn’t let her back in the house until he goggled how to get off the skunk smell.  Here’s the recipe: ¼ c baking soda in 1 quart of vinegar mixed in a large bowl.  The foam action of the oxidation breaks down the chemical bonds that makes the stink.  This works better than tomato juice according to her.  As for her shoes – she trashed them and bought a new pair!

The only advice I have for my fellow runners is to keep one eye on the trail and the other on our fury friends.  If you encounter a skunk – let them set the pace!