Thanks for Friends, Fitness & Endorphins!

Thanks for Friends, Fitness & Endorphins!

2011 has been a difficult year for me.  So when I was out for a run I started to reflect on the past year.  What is there for me to be thankful for this Thanksgiving??? Somewhere around mile 3 or 4 the endorphins started to kick in and I realized that I had so much to appreciate.

I am thankful for being an athlete. As an athlete I am used to struggling and overcoming adversity. Sure sometimes you can just coast to the finish line but other times it takes every ounce of determination and real  grit just to put one foot in front of the other. This was the year I beat cancer, overcame a painful post surgery complication and survived an impressive bike crash.  I am thankful that I had the athletic training that helped me through this difficult time. Every day I just put one foot in front of the other until I got my healthy self back.

I am thankful for having friends who can inspire me. Like my friend Ariel Gilbert. You might have heard of Ariel. She is a world class athlete who happens to be blind. She has had a very difficult year as well. In March she donated her kidney to a coworker who desperately needed a transplant. What a courageous and heroic act. Unfortunately, the transplant damaged her remaining kidney. This has never happened before! As a result Ariel has been in and out for the hospital for the last 9 months.  It has been a scary and frustrating experience. Unable to work out at the same level Ariel had to modify her activity level. So she started to walk really slowly instead of going out on the bay and rowing for hours. She took up aquatic size classes instead to doing spin classes which were too much.  There were many health scares & setbacks but she always took them in stride and found an alternative course of action.  What an inspiration she has been for me. I am thankful that Ariel is finally on the road to recovery.  We are both looking forward to working out hard together next year!

I am thankful for our local heroes like my buddy Mike. Mike is a very fit young man who has served two tours of duty in Iraq. So it came as a surprise when I found out that this brave young sailor has a real fear of needles. Regardless, he offered 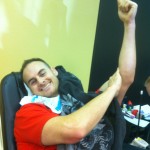 to donate his blood for my daughter’s open heart surgery next month. Mike barely knows my daughter but was willing to step up and face his fears for her. He told me that he would be okay with the nurses cutting him with a big knife rather than poking him with a needle. I am so thankful that there are people who willing step up then they are needed and give unselfishly to others. (A number of folks gave blood for her and I am thankful for every drop!)

I am thankful for living in a community like Petaluma where a group of folks are putting on the 5th annual Turkey Trot Thanksgiving Run to benefit the local food bank. No fee, no fan fare, just show up at McNear Park at 9:00 am on Thanksgiving with a donation for the food bank and run or walk with friends and neighbors. 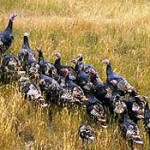 Finally, I am thankful for endorphins. Because when  I’m bummed out I can usually count on a good hit of exercise-infused endorphins to pull me out of my funk. No, endorphins might not change your circumstances but they can change your perspective.

So if your your not sure about what you are thankful for, go out for a walk, run, swim, row, ride or whatever and get those endorphins to give you a little perspective.

Happy Thanksgiving to all!